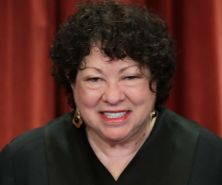 In a recent dissent to a Supreme Court decision, Associate Justice Sonia Sotomayor crossed the bounds of judicial norms by accusing her fellow Supreme Court colleagues of being biased toward the Trump administration in carrying out their judicial work. END_OF_DOCUMENT_TOKEN_TO_BE_REPLACED