“Masks are required to be worn in all public spaces. Law enforcement officials are able to cite Pennsylvanians who aren’t wearing a mask in public.” PA Gov. and BLM supporter Tom Wolf 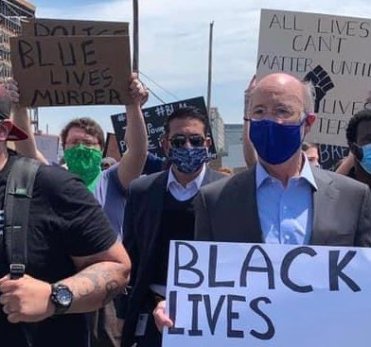 PA Gov. Tom Wolf an ardent supporter of #DefundThePolice – Black Lives Matter shamelessly uses a police station and police for a backdrop for the Levine and Wolf Show. Wolf who marches in BLM parades while marchers carry “Blue Lives Murder” signs, would have the same “murdering racist” blue lives, he protests against, enforce his and Levine’s mandatory whenever you leave your house mask orders? One can only conclude Wolf cares more about his mask edicts than black lives.

On June 04, 2020 Gov. Wolf’s Pennsylvania Commissions on African American, Latino, Asian Pacific American, Women and LGBTQ Affairs released a joint statement today honoring the memory of George Floyd and other Americans of color who have lost their lives to police violence, and denouncing indoctrinated racism, bigotry and sanctioned

In a rambling statement it contains a litany of the “acts of bigotry, hatred, and racism” and “sanctioned violence against black and brown” communities being perpetrated in Pennsylvania. 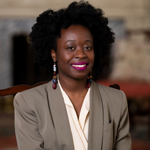 Danielle Okai, executive director of the Pennsylvania Commission for Women, stated in part: “In Pennsylvania…, people who are Black are much more likely to die at the hands of police than any other group of Pennsylvanians. As a Black woman, I fear for my life, the lives of my loved ones, and the lives of all Black Pennsylvanians.”

While a member of Wolf’s Commission on African American, Latino, Asian Pacific American, Women and LGBTQ literally fears for her life because of all the blacks dieing “at the hands of police” in Pennsylvania; the PA Gov. touts his and Levine’s “enforcement abilities” by having local and Pennsylvania state police on an episode of his show.

Gov. Tom Wolf continued to urge Pennsylvanians to follow COVID-19 mitigation orders, including wearing a mask and social distancing, but reminded residents and businesses that there can be penalties for failing to comply.

“These orders do give us the ability to cite folks who aren’t taking this precaution. If that’s what it’s going to take to keep Pennsylvanians safe, that’s what we’ll do,” Wolf said.

During a news conference Monday at the Susquehanna Township public safety building, Wolf took a stronger tone against non-compliance with state mandates.

Today I'm at Susquehanna Township Police headquarters to talk about the enforcement of #COVID19 mitigation orders.

Masks are required to be worn in all public spaces. Law enforcement officials are able to cite Pennsylvanians who aren't wearing a mask in public. pic.twitter.com/oxNNz8lAWV

It was a position echoed by members of his administration.

“Don’t put the workers in these restaurants in the awkward position of having to ask you to wear a mask,” he said.

Pennsylvania State Police are urging voluntary compliance but pointed out that officers can issue citations. State police said they have issued 60 warnings since mid-April.

“Penalties may be imposed for persons and businesses willfully refusing to comply with the mitigation requirements outlined in the order,” Price said.

State officials said that with the coronavirus still not under control, there is a lot riding on individual actions.

“Pennsylvanians want to be at work and Pennsylvania’s school children want to be at school. Our actions collectively as a community will directly impact us being able to do those things,” Secretary of Health Dr. Rachel Levine said.