Has BLM supporter Tom Wolf ever once been asked by the Pennsylvania media to disavow or condemn anything BLM does or says? He does march in their parades.

What did these White teenage girls ever do to deserve being subjected to the vile language directed at them by an adult black male who is a candidate for a house seat in Minnesota? If you think you can find common ground with people like this, you might want to rethink that position. Should any parent be expected to allow an adult to scream vulgarities at their teenage daughter? What type of people condone this behavior?

This November John Thompson could be elected to the Minnesota House of Representatives. If elected it’s very clear who he’ll be representing and it will not be the “white racist motherf******! .

John Thompson, who recently won his Primary for 67A in St. Paul, goes off and screams at neighborhood children, residents, and neighbors of Police Union Leader Bob Kroll.

Over the weekend, Democratic candidate John Thompson spoke at a Black Lives Matter protest by the home of Police Officers Federation of Minneapolis president Bob Kroll and his wife, WCCO anchor Liz Collin. Thompson recently won the Democratic primary for District 62A in St. Paul, Minnesota.

Multiple video coverages of Thompson’s seven-minute speech show him calling for violence against the “racists” of Hugo, Minnesota.

Thompson also accused Kroll of membership in the Ku Klux Klan, referring to him as a “f****** clansman,” and “the Grand Wizard.”

Across the street from the police union leader’s residence, five teenaged girls and several adults were watching the protest from what appeared to be a cookout by their garage. Thompson addressed the girls when they attempted to retreat inside:

Thompson finished his speech with a hint at what his time in office might look like, if he were to win November’s election.

Many protestors wore black shirts that read “BOB KKKROLL MUST GO!” in white; some held signs calling for revolution and “no peace until justice.” Later on in the videos, protestors can be seen walking and kneeling with raised black power fists on residents’ private property. At one point, protestors beat piñatas bearing the likenesses of Kroll and his wife, WCCO anchor Liz Collin. Rally leaders encouraged protestors to dump their signs and trash across the front of the Kroll property.

Thompson issued an apology the following evening via his Facebook campaign page, referring to his speech as “inflammatory rhetoric” that was unhelpful for making a “positive difference.” Comments from both his supporters and critics were unforgiving, calling Thompson “divisive,” “hateful,” and “racist.”

None of his endorsers have published any comment on Thompson’s speech.

Corinne Murdock is a reporter at The Minnesota Sun and the Star News Network. Follow her latest on Twitter, or email tips to corinnejournalist@gmail.com.
Photo “John Thompson” by John Thompson and “BLM Protest” by AlphaNews. 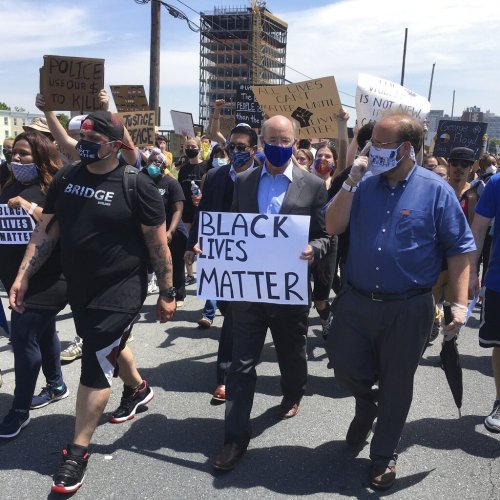